“Just being myself; because everyone else is already taken.”

I’ve been playing ‘Angry Birds’ for quite some while now. A P.C Version precisely. ‘Angry Birds’ sounds like those voices that speak to me in my head. Those ones, I’ve never really understood. I just do what they say.

But have you ever asked yourself why the birds are so angry? Why do some of them have special powers? Why is there a giant slingshot? Why are they trying to destroy the piggies? Players destroy pigs by firing birds from slingshots. The birds get angry when they’re hurled into the wall. Who wouldn’t? Has anyone ever finished this game? Any version? All levels?! Am I the only dumb one? Finishing angry birds should appear on one’s curriculum vitae. Methinks eventually, the players end up angry, not the birds. Is there a version with angry cats looking for the angry birds to eat them?

There’s this thing in me that resonates with birds. I’ve never really understood it properly. Maybe it’s how they soar high skies. Or how they see beyond my horizon. Is it probably how they make great delicacy? As I grew up, mourning collared doves and three-banded coursers flocked to the single strand of wire strung to bring our house electricity. One by one, at irregular intervals. I’d think the next one was the last. But then it wasn’t. It would leave this discomfort in me that an unfinished sentence does. That’s why.

They thought they’d hatch out of clean, smooth, beautiful eggs, as they do. But it’s no use because after their efforts, we can’t sing. Not effortlessly as they do. We can’t fly. Not without marijuana and metal. And as for the eggs, we don’t stand a chance.

These birds make me miss being 8. Remember? So innocent. Before we knew that babies are not collected at the base of the forbidden acacia tree. How we’d laugh at the headmaster walking with his underpants stuck in his bottom. We hadn’t even known to convey silent treatment with blank texts. How we sat with Jackie at her grandma’s kitchen and hear stories of birds being the eyes of heaven, and houseflies being the spies of hell. School lessons would get boring and staring at birds would be a pastime. Remember?

One day when I was eight, I got bored in Math class. I stared at a bird outside. It was on the wire mesh surrounding the flag-pole’s flower bed. The slight builds. The luminous brown eyes. Her friends joined her. They formed a flock of small dark birds. I think they were young hawks. It would have been hard for me to say exactly when the accumulation of birds on the wire mesh moved from interesting to terrifying. It was somewhere in the first hundred or so, anyway. And it was in the way they didn’t coo, or caw, or trill, or song. They simply landed on the wire, and they watched me. The first bird stared at me like I murdered his whole family.

That reminded me of something. Just before my eighth birthday, I was hanging out with this gang we’d formed in the hood. Then, some fat birds would sit together on the electric wires, lined up like beads on an abacus. We’d hurl pebbles at them just to scare them away. In fact, to make them angry. We’d wait for a hawk to swoop down on his rat. Precise we were. Then we’d shoot the ‘black hawk down’ just to ‘mock the killing bird’! Then we’d mock him in his crying, whistling, calling … as his life slowly betrayed him. 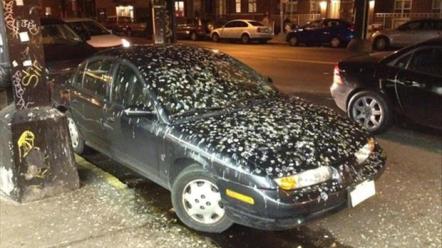 These birds don’t look that angry. Real angry birds are the scavenging birds found on the acacia trees around Nyayo Stadium. They are also found at the Dandora Dumpsite and on Harry Thuku Road next to the University of Nairobi. Marabou Stork. The world’s ugliest. They shit on you as you rush to see that major client. They know your Sunday best. They shower it with fecal blessings. Those are the real angry birds.

There was an old man who fed birds. Where did he go? He used to live at the corner of our hood and always walked with sticks while collecting beads. He told us wings don’t fly. It’s the bird that flies. The following day, we tied his rooster’s wings together with rubber bands. Then we placed him at his doorway. He got the message. I earned a spanking. Later on, I learnt that he meant ‘circumstances don’t dictate destiny’. We do. When I learnt that, I gobbled up a bird at K.F.Cs. Just like my ancestors.

You know that bright-eyed and bushy-tailed feeling some people claim to have after playing all levels? What’s that like? I think I should quit playing ‘Angry Birds’ and learn how to sing like happy birds.

Once upon a time, women were birds. They would sing at dawn as they went to fetch water. They would sing at dusk as they brought the firewood home. I’d see them when we were in the village. Birds still remember what we have forgotten; that the world is meant to be celebrated. Some women in this estate of mine are still birds. Angry ones though. I’ve heard them several times. They throw things at their boyfriends and batter their hubbies; and call them ‘pigs’. ‘Angry Birds’ should be banned!

Our Trip to Essaouira Morocco